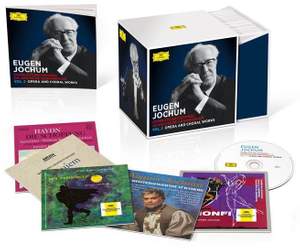 Bruckner: Mass No. 1 in D Minor

Documentation includes an introduction by Jochum’s daughter and an essay on Jochum as a conductor of sacred and operatic works; plus intriguing rarely-heard bonus content including a German-Language audio biography of the conductor’s life.

It was in his youth that Eugen Jochum formed his love of the musical works which accompanied the Catholic liturgy and it was as a church musician he developed his ear for a good voice. Inspired by his discovery of Wagner’s Tristan he pursued a career as an opera conductor and developed an extensive repertoire; the mainstays of which were the Mozart operas, Beethoven’s Fidelio, Weber’s Freischütz and the complete Wagner corpus. A further love became the great sacred works of J.S. Bach, which he perceived as an exalted form of divine service. With his profound grasp of the organ and his deep understanding of Bruckner’s works and his Catholic faith he also became the paradigm of Bruckner exponents and exegetes.

Long before the movement towards historically informed performance practice, Jochum was concerned to perform, as far as at all possible, in the manner in which the composer intended and he took a great deal of trouble with his scores: In a handwritten note on his conducting copy of the score of Der Freischütz, he noted that the dynamics and phrasing in the facsimile were not reproduced in his conducting score: “It is incomprehensible that [the publisher] did not print it in his edition as it appears in the original!! The original is thus absolutely correct!!”

Eugen Jochum: The Opera & Choral Edition is an intensely personal document of Jochum’s sincere and honest pursuit of the composer’s intentions.