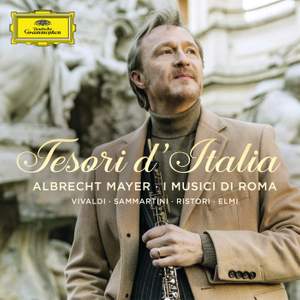 Elmi: Concerto for Oboe, Strings and Basso continuo in A minor

Albrecht Mayer is back with a brand new Baroque album that will please both newcomers and connoisseurs. Besides the famous Vivaldi “Concerto for Oboe and Strings in C major, RV 450”, the album includes a great selection of hidden gems and world premiere recordings of musical jewels.

Passionate about expanding his instrument’s repertoire, Mayer embarked on a quest to uncover some of the buried treasures of the Italian Baroque. After a long and exciting musical research in numerous libraries and archives throughout Europe, Albrecht brings to light unrecorded music from the Italian Baroque and early Classicism. For this fascinating and musical journey Albrecht counts on the Italian iconic ensemble I Musici di Roma with whom he will present his new album in an extensive German tour in December 2017.

Albrecht Mayer is one of the most sought-after oboists of our time. He combines his position as principal oboist of the Berliner Philharmoniker, with an extraordinary career as a soloist. He has played under the baton of conductors like Sir Simon Rattle, Claudio Abbado, or Nikolaus Harnoncourt and best world class orchestras like Mahler Chamber Orchestra or Berliner Philharmoniker. He also regularly plays chamber music and conducts ensembles.

Listeners and critics are equally enthused: There is talk of ‘gods’, of the ‘miraculous oboe’, or of Mayer’s ‘raising the oboe’ as a seductive instrument, which sounds with a unique and poetic voice when played by Mayer.

This album features Albrecht Mayer as a polyhedral musician, showing along with his facet as oboe player, his extraordinary contribution as musical director, researcher and author of all the cadenzas.