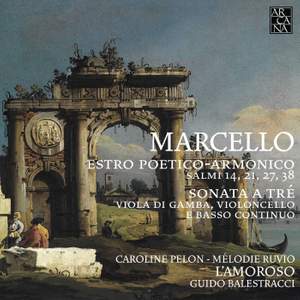 Ma so ben io che a’ miei fratelli in breve

With a selection from Benedetto Marcello’s Estro poetico-armonico, a monumental musical setting of the first fifty psalms, the first edition of which was accompanied by letters of praise from such musicians as Telemann, Mattheson and Bononcini, L’Amoroso finds an original way of celebrating its initial passion, the Italian repertory with viola da gamba, of which the ensemble has made a speciality at the instigation of Guido Balestracci. The artistic project here renews the group’s ties with the centrality of melody, the dialogue between voices and instruments, and experimentation with vocal sound. The two singers, the ductile and sensitive soprano Caroline Pelon and the alto Mélodie Ruvio with her deep tone-colours, appear in both solo and duet formation. A sonata from the composer’s op.2, testifying to the taste for the viola da gamba typical of Baroque culture in Venice, completes this recording, a new collaboration between the ensemble and Outhere that also marks the debut of L’Amoroso and Guido Balestracci on the Arcana label.