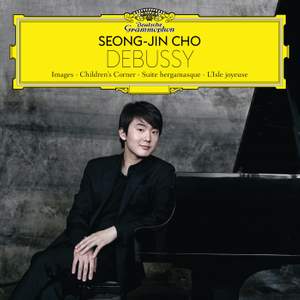 His playing is riveting as ever...what comes across strongly here is how he makes each of these little pieces into a complete canvas: every adjustment of speed or volume finely weighted to keep... — The Guardian, 30th November 2017, 4 out of 5 stars More…

• The 2015 Chopin Competition winner Seong-Jin Cho explores the music of Claude Debussy on the eve of the 100th anniversary of the great French composer’s death.

• After two best-selling all-Chopin releases, it’s fitting that Seong-Jin dedicates his 3rd CD to some of Debussy’s most popular piano works.

• Chopin, who spent his main creative years in Paris, was considered by Debussy to be the most important omposer of his time, and for Seong-Jin’s, whose formative years have been spent in Paris, Debussy is a composer with whom he feels a very strong affinity.

• For his new album Seong-Jin has brought together some of Debussy’s most popular works and cycles such as Images I & II”, Suite Bergamasque (including the beloved “Clair de Lune”, well-known from various oundtrack features) and Children’s Corner, which contains favourites of every young aspiring piano student.

• Debussy marked the beginning of Seong-Jin’s career, as Children’s Corner was on the program of his first ever appearance on stage.

His playing is riveting as ever...what comes across strongly here is how he makes each of these little pieces into a complete canvas: every adjustment of speed or volume finely weighted to keep the whole in balance. Yet there’s no sense he’s overthinking things...his transparent, ultimately exuberant performance [of L'Isle Joyeuse] is very rewarding.