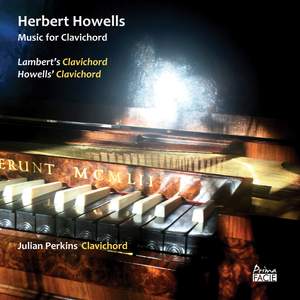 Perkins tackles the 32 miniatures with panache and empathy to spare. What fulsome tones he draws out of the Pavane named for Vaughan Williams; an invigorating tally-ho spurs on ‘Berkley’s Hunt’;... — BBC Music Magazine, February 2018, More…

Prima Facie Records is pleased to announce the release of a 2-CD set, Herbert Howells - Music for Clavichord (PFCD065/66), performed by Julian Perkins. This is the first complete recording of all Howells' published music for clavichord, and will be released on 27 October 2017. The set includes Lambert's Clavichord Op. 41 (HH 165) and Howells' Clavichord (HH 237) Books I and II. Since Lambert's Clavichord and eight pieces from Howells' Clavichord were recorded by Ruth Dyson (1917-1997) on an LP (Wealden, WS 194 in 1981), this new recording is dedicated to her, in her centenary year. Writing about Lambert's Clavichord in 1928, Sir Richard Terry observed: "Mr Howells has absorbed all the wealth and variety of Tudor rhythms, but keeps his own individuality intact. His music is modern inasmuch as he uses chords and progressions unknown in Tudor times, but the spirit of the old composers is there all the while. In other words, he and his instruments are one."

A favourite pupil of Sir Charles Villiers Stanford, Herbert Howells (1892-1983) studied at the Royal College of Music in London. The compositions of his early maturity received much critical acclaim, but a hostile reception of his second piano concerto in 1925 led to a period of uncertainty and relative compositional inactivity. The composing of Lambert's Clavichord in 1926/27 proved to be a restorative influence. After World War II, with the exception of the symphony and opera, he continued to compose in most musical forms, contributing especially to the music of the Anglican Church. In 1979 he retired from the teaching staff of the Royal College of Music in London after 59 years. He was also in constant demand as a highly discerning and constructive adjudicator.

Perkins tackles the 32 miniatures with panache and empathy to spare. What fulsome tones he draws out of the Pavane named for Vaughan Williams; an invigorating tally-ho spurs on ‘Berkley’s Hunt’; and a wry nod to William Walton in Coronation best bib and tucker rounds things off with an abracadabra of a celebratory flourish.

The influence of English Tudor music runs like a silver thread through the compositions of Herbert Howells...Howells’s own deliciously distinctive voice comes to the fore in [Howell's Clavichord], gathered in 1961 – pieces that test the virtuosity of the performer, a challenge easily accepted by the stylish Julian Perkins.