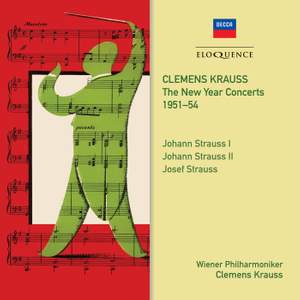 Of all the conductors who have championed the music of the Strauss family with the Vienna Philharmonic, it is Clemens Krauss who was one of the greatest pioneers. He it was who conducted the first New Year’s Day concert in 1939, and continued to lead the occasion on each new year until his death in May 1954, but only beginning with the second half of that 1954 concert was the event recorded for commercial release. For each of the previous years, Krauss and the Vienna Philharmonic had gone into the studio during the summer to set down a mix of waltzes and polkas which would, when released shortly after the concert proper, make a memento of the occasion for its increasingly worldwide audience on radio.

The various ‘New Year’s Concert’ albums are now presented together in a 2CD set. A new editorial note by the opera director and critic Mike Ashman gives context to the stupendous popularity of the Strauss family’s music, both in their time and ever since, to the all-too-short career of Krauss and to the tradition of the New Year concerts in Vienna.

To open the set, the overtures to Die Fledermaus and Die Zigeunerbaron make enticing tasters for Krauss’s Decca studio recordings of both operettas, also reissued by Eloquence (ELQ4827379 and ELQ4827371). Most of the sweetest Straussian lollipops are here, such as the Blue Danube and the Radetzky March, but so too are lesser-known treasures such as Die Libelle (The Dragonfly) and the Vergnügungszug Polka: in their different ways both supreme examples of Viennese light music, and conducted by Krauss with a lightness of touch perhaps rivalled since only by Carlos Kleiber.

As specialists in the idioms of ‘both’ Strausses – Richard and the Waltz King’s family – this pair of conductors was unique. Krauss himself was Austrian to the core, the son of a young Viennese court dancer and a banker well-connected at the Habsburg court. He had the unique lift of the waltz-rhythm at his command, and the unquestioned respect of the Vienna Philharmonic’s famously individualistic musicians, as these treasurable recordings demonstrate.

‘For those to whom The Blue Danube means something that you hear rushed through on the pier or in a café, this playing will be a revelation of sheer delight. Clemens Krauss does it all to perfection. It is good to have some less-known pieces … All ranges of brows, high to low, should have this record by them to restore spirits when in dumps.’ Gramophone, May 1954 (Third New Year’s Concert)

Krauss was a master of waltz uplift and polka character, with Josef Strauss supreme here. Only Carlos Kleiber’s New Year’s Day programmes have shone as bright.