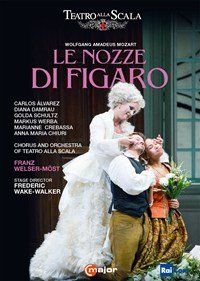 At first the orchestra sounds a little stiff, but as the night goes on Welser-Möst unbends and the combination of his Austrian grace and the Italian orchestra’s warmth is appealing…Crebassa’s... — Gramophone Magazine, February 2018 More…

For the 225th anniversary of Mozart’s death, La Scala Theatre presents a new production of Le nozze di Figaro that had been entrusted to the extraordinary director Frederic Wake-Walker (author of a production of La finta giardiniera which was the revelation of the Glyndebourne Festival in 2014). He focuses the action of the piece on the instability of love: “Le nozze di Figaro presents us with an impossibility – a world where everyone is loving and forgiving.” The approach to his direction is “elaborate and very innovative” and “also musically, the new production of Figaro is worth a tour to Milan." (NZZ) "the cast is magnificent.” (Kurier) “… when Diana Damrau enters as the Countess, we get a performance of special gravitas. Even the orchestra under Franz Welser Möst’s baton melts to such grace ”

At first the orchestra sounds a little stiff, but as the night goes on Welser-Möst unbends and the combination of his Austrian grace and the Italian orchestra’s warmth is appealing…Crebassa’s limpidly sung Cherubino is delightful…Damrau is all silver and silk, imbuing her arias with real drama and pathos; Schultz’s soprano is cream and gold.