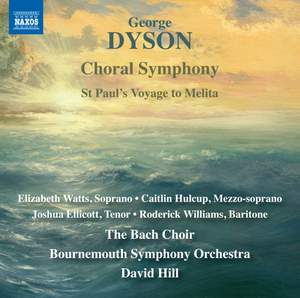 This is the Symphony’s premiere recording. It is a very good one. Conductor David Hill shapes the opening movement, an amalgam of overture and chorus, with evident affection…[Dyson’s] individuality... — BBC Music Magazine, January 2018, More…

Born into a working-class family, George Dyson became one of the most important musicians and composers of his day. The previously unknown Choral Symphony was written as an examination work while Dyson was studying at Oxford, and it was only recently discovered at the Bodleian Library. Dyson relishes his dramatic chosen text from Psalm 107 on the expulsion from and homecoming of the Jews to Israel, a narrative that inspires trademark features that would make his later works so attractive. Its seascape finale links neatly with St. Paul’s Voyage to Melita, another vivid text from which Technicolor musical images are conjured.

This is the Symphony’s premiere recording. It is a very good one. Conductor David Hill shapes the opening movement, an amalgam of overture and chorus, with evident affection…[Dyson’s] individuality merges most sharply in the dark-hued Largo, a choral lament whose intensity if impressively sustained by Hill and his singers…For followers of Dyson’s music, this new CD is without question a mandatory purchase.

On this showing, none could surely disagree with Spicer’s view that these and other neglected Dyson works fully deserve to become once more an important part of our landscape. Music lovers might well start the ball rolling with this highly recommended recording.

[Watts] brings a sense of love and fluidity to her solo contributions…Even in the opening pages there are textural devices and harmonic glances that colour the tale, while the proverbial sea spray of the storm sequence is thrilling…Perhaps not a masterpiece, but the Voyage is worth a listen.

Dyson’s Choral Symphony, composed when he was a student at Oxford, was only discovered recently and is here recorded for the first time. It’s an ambitious setting of Psalm 107 “on the expulsion from and homecoming of the Jews to Israel”, which draws from Dyson music of lyrical beauty, dramatic fervour and majestic aspiration, very assured and very English.