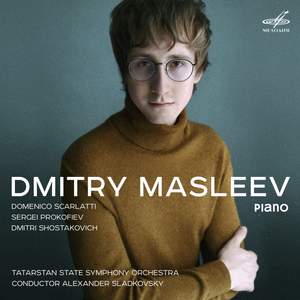 Nothing sensational or sensationalist here , but the way he negotiates the twists, turns and subtle cornerings of the harmonic invention is totally disarming and without a trace of self-consciousness.... — Gramophone Magazine, January 2018 More…

Shostakovich: Ballet Suite No. 3: Elegy (from The Human Comedy)

Ahead of his St John's Smith Square recital on Thursday, the Russian pianist talks to Katherine about his debut solo recording of Scarlatti, Prokofiev and Shostakovich.

Firma Melodiya presents a disc recorded by young Russian pianist Dmitry Masleev. The musician’s name became widely known after his convincing victory at the latest International Tchaikovsky Competition in 2015 when he received the first prize and a special prize for his performance of a Mozart concerto. In early 2017, Dmitry debuted at Carnegie Hall, the Paris Philharmonie and the Konzerthaus Berlin. This release is focused on Russian music of the 20th century. Shostakovich’s Piano Concerto No. 2 dedicated to the composer’s son Maxim was recorded by Dmitry Masleev as part of the project comprising Shostakovich complete concertos recorded by the Tatarstan State Orchestra and conductor Alexander Sladkovsky. The pianist also performs Prokofiev’s Piano Sonata No. 2, a virtuosic and “rebellious” piece written when the composer was young (his Piano Concerto No. 3 was one of the key numbers of the pianist’s competition programme). On the face of it, Domenico Scarlatti’s piano sonata next to Prokofiev’s piece may seem odd, but the transparent clarity of the Italian composer’s early classicism seamlessly blends with the nature of the selected works. The programme comes with an encore – Shostakovich’s Elegy from Ballet Suite No. 3 arranged by Dmitry Masleev.

Nothing sensational or sensationalist here , but the way he negotiates the twists, turns and subtle cornerings of the harmonic invention is totally disarming and without a trace of self-consciousness. Hear, too, the bustling energy when required, which never tips over into gaudy display…The cheeky athleticism of the Prokofiev finale suggests a born Shostakovich player. And so it proves.

The slow movement's Rachmaninov pastiche is played very simply, very straight, and the finale’s 7/8 rhythms pushed to the limit. There's a charming Shostakovich bonus item, too. All good, and very well recorded.