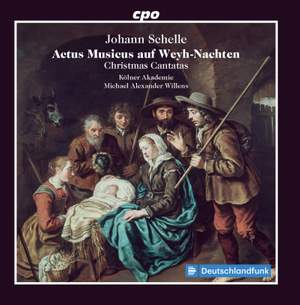 In 1677 Johann Schelle became the music director at the Church of St. Thomas in Leipzig, succeeding his teacher Sebastian Knüpfer and preceding Johann Kuhnau in this post. His own pupils included important composers like Johann Christoph Graupner, Johann David Heinichen, Reinhard Keiser, Johann Theodor Roemhildt, and Friedrich Wilhelm Zachow. More than 180 compositions by Schelle are documented, but only forty-eight of these works are extant. Schelle’s importance lies above all in two areas: in the combination of biblical texts and free sacred poems during his progressive development of the genre of the sacred concerto, which qualifies as an early form of the later Protestant church cantata, and in the setting of chorale cantatas. This CD presents a recording of Schelle’s known compositions for Advent and Christmas. The featured work, the Actus Musicus auf Weyh-Nachten, is a musical representation of the birth of Christ. Its textual basis is formed not only by the familiar biblical text from the Gospel of Luke (2:1-20) but also by the fifteen stanzas of Luther’s hymn ‘Vom Himmel hoch, da komm ich her’.