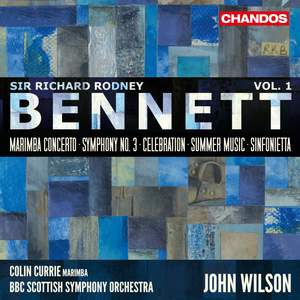 Was there anything he couldn’t say musically? No need to answer that, but rejoice in the fact that his friend and champion John Wilson is honouring him in this new series for Chandos…You will... — Gramophone Magazine, January 2018 More…

The BBC Scottish Symphony Orchestra and its Associate Guest Conductor John Wilson record for the first time together on Chandos, embarking on a new series devoted to the brilliant orchestral works of Sir Richard Rodney Bennett. While internationally famous for his dances, jazz creations, and film and TV scores, Bennett wrote sumptuous works of ‘concert music’ as he called it. This first volume reveals him as one fo the most brilliant natural talents to emerge in post-war British music. Influenced by both the American Songbook and his teacher Pierre Boulez, he also always strove to place melody- and emotional honesty- at the center of his music. These traits are coupled in the epic Marimba Concerto, an innovative piece for the composer, moving from a colorful and lyrical first movement to highly virtuosic passages and strikingly athletic cadenzas. The demanding solo part is tackled here by the multi-award winning Colin Currie, nowadays seen as the world’s finest and most daring percussionist, as well as a champion of contemporary music.

Was there anything he couldn’t say musically? No need to answer that, but rejoice in the fact that his friend and champion John Wilson is honouring him in this new series for Chandos…You will want this disc for Symphony No. 3 (1987) – a work of quiet evolution and tiny revelations…Wilson and the BBC Scottish Symphony Orchestra do the piece proud.

Wilson is the ideal interpreter of this fine retrospective of five symphonic works by a genuine “crossover” composer, famous for his film and television scores.

John Wilson is the ideal interpreter of this composer’s music for a variety of reasons, including his empathy, total grasp and inspiring direction. The result, captured in impressive sound, is a fabulously successful inauguration of a badly-needed revivification of a major figure whose art is by no means as fully understood or appreciated as it deserves.

…His is music to return to often, when – I am sure – further and deeper characteristics, of unification and expression, will surely be revealed. This Chandos series will be one of the most significant in British music for quite a few years.