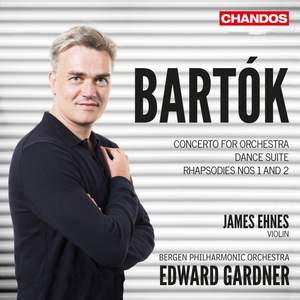 The Dance Suite is impeccably done, and James Ehnes’s intense, rhythmically taut playing does the Rhapsodies proud…the disc makes a worthy companion to The Miraculous Mandarin and Music for Strings,... — BBC Music Magazine, January 2018, 4 out of 5 stars More…

Four years after a highly successful Bartok recording with the Melbourne Symphony Orchestra, Edward Gardner here returns to the composer on SACD, with James Ehnes as solo violinist, and his Bergen Philharmonic Orchestra. The central piece in this recording is the Concerto for Orchestra, the largest work that Bartok completed during the last five years of his life and described by the composer, in the program notes for its 1944 premiere, as ‘a gradual transition from the sternness of the first movement and the lugubrious death-song of the third, to the life-assertion of the last one.’ It is joined by the Dance Suite, the immediate predecessor, among Bartok’s few works for full orchestra without a soloist, of the Concerto for Orchestra, though by more than two decades; and by the violin Rhapsodies, the colorful folk influences of which are revealed by James Ehnes, a specialist in the repertoire, who already has recorded the complete sonatas as well as the concertos for violin and for viola to critical acclaim.

The Dance Suite is impeccably done, and James Ehnes’s intense, rhythmically taut playing does the Rhapsodies proud…the disc makes a worthy companion to The Miraculous Mandarin and Music for Strings, Percussion and Celesta recorded by the same forces.

Gardner has his traditional well- behaved orchestra fizzing with attitude and brazen ferocity, but there is hard- earned character too, not least in the swarming string passages of the Concerto for Orchestra’s first scherzo and the comparative warmth of the movement that follows.