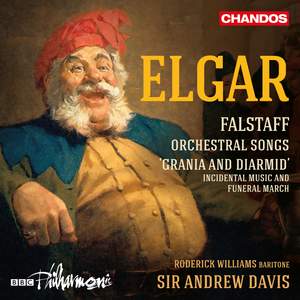 The performances of the songs are ardent, warm and full of conviction. As ever Roderick Williams sounds completely on the composer’s side. But after Falstaff it’s all too clear that they really... — BBC Music Magazine, January 2018, More…

IIIb. The Return Through Gloucestershire

IIId. The New King - The Hurried Ride to London

IVb. The Repudiation of Falstaff, and His Death

Elgar: The Wind at Dawn (version for voice and orchestra)

Elgar: Pipes of Pan (version for voice and orchestra)

Elgar: The King's Way (version for voice and orchestra)

Sir Andrew Davis takes his multi-award-winning Elgar discography to the next level with breathtaking interpretations of Falstaff, Elgar’s most accomplished and characteristic work, and several orchestral songs, with exemplary support from the BBC Philharmonic, all recorded in surround-sound. Owing to its technical challenges and more complex harmonic language, the composer always had a high opinion of Falstaff, saying that he had enjoyed writing it ‘more than any other music I have ever composed and perhaps for that reason it may prove to be among my best efforts’. His earlier music for Grania and Diarmid pays tribute to the Irish legend of Diarmuid and Grainne; the Funeral March is probably Elgar’s noblest creation, and echoes the popular Pomp and Circumstance Marches. The various less well-known songs, given heroic interpretations by the baritone Roderick Williams OBE, span the multiple facets of Elgar’s style, from the stern and dramatic impressions of Op. 60 to the satirical and impish jollity of ‘Kindly do not SMOKE’.

The performances of the songs are ardent, warm and full of conviction. As ever Roderick Williams sounds completely on the composer’s side. But after Falstaff it’s all too clear that they really aren’t top drawer Elgar. A fine effort all round, recording very much included, but perhaps not the ideal present for an Elgar-phobic.

This is Andrew Davis’s third recording of Elgar’s Falstaff. It is, not to beat about the bush, a superbly perceptive traversal, evincing a strength of purpose, emotional candour and meticulous attention to detail that give it the edge over its notable predecessors...All told, a terrific anthology, and absolutely not to missed.

This is top Elgar, the Funeral March being particularly impressive. I confess I had not even thought about Elgar as a song writer but the selection we have here in orchestral garb are without exception a delight. Full of nostalgia but
always with attractive melodies, albeit short-breathed compared to the Elgar of Gerontius and all the other masterly oratorios.

Williams has just the right voice for the three restrained Op 59 songs, while the two of Op 60, orchestrated by the composer, burst with power and nobility. All of the vocal contributions are sterling… to end the disc with the 49- second Smoking Cantata is pure genius.

The two movements from Grania and Diarmid, full of fantasy and feeling, receive top- notch treatment. Roderick Williams is on equally fine form in the collection of orchestral songs that complete the disc…the eloquence of his singing can’t be faulted.