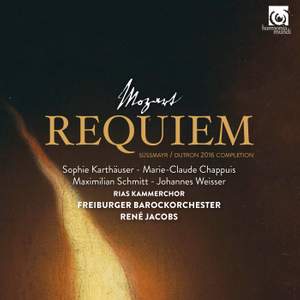 Choir members are the virtuosos here. Their flexibility enables them to enrich or bleach vocal colour, and flood or dry up volume levels, to the subtlest degree. Jacobs plays the choir like an... — BBC Music Magazine, January 2018, 5 out of 5 stars More… 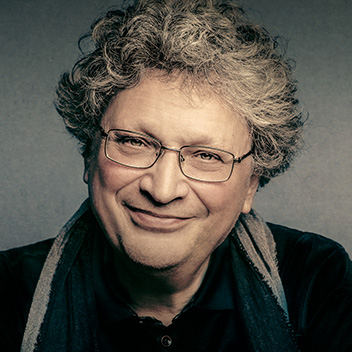 Recording of the Week,  Mozart's Requiem from René Jacobs

The Belgian conductor presents Mozart's late mass in a new version by Pierre-Henri Dutron, which builds on and refines material from the familiar Süssmayr completion.

1791: a busy year for Mozart who, when he received a commission for a Requiem, was already working on Die Zauberflöte and had a deadline to deliver La clemenza di Tito. Everyone knows what happened next: the commission postponed, exhaustion and death, a work left unfinished and which, after several composers were approached, was finally completed by Süssmayr. This version gradually became established as the closest to Mozart’s intentions, but is not free of faulty part-writing and orchestration. In 2016 a young French composer, Pierre-Henri Dutron, persuaded René Jacobs to perform his own revision of the Requiem completed by Süssmayr. This new version was created with great success in a series of five concerts around Europe in November 2016. We now present its first studio recording, released exclusively on harmonia mundi.

Choir members are the virtuosos here. Their flexibility enables them to enrich or bleach vocal colour, and flood or dry up volume levels, to the subtlest degree. Jacobs plays the choir like an instrument, as he does the band. The shapes he coaxes from words, and the force he provokes from the ensemble, open out the new dimensions of Dutron’s score.

Jacobs’s conducting...uses textural variation, urgent but flexibly shaped phrasing and the odd trick of rhetorical timing to keep the work light, briskly flowing and human in scale. As ever he has plenty of ideas, and the lithe and alert playing of the Freiburg Baroque Orchestra and the firm singing of the RIAS Chamber Choir ensure that he is able to realise them with clarity and effective control of detail.

Dutron uses Süssmayr’s original material as a jumping-off point for his own inspiration rather than discarding it altogether...Many of the hallmarks which made Jacobs’s Mozart opera series so vital (minus, of course, the occasionally hyperactive continuo-playing which polarised opinion there!) are in evidence...and the four soloists (all alumni of the opera recordings) blend seamlessly with one another.

The results are sometimes stimulating, often jarring. There is fine work from the soloists under René Jacobs, and plenty of force in his direction, but the sopranos have a tendency to sing flat at the ends of phrases.