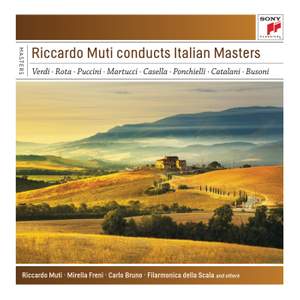 I. "No, svaniti non sono i sogni". Andantino

Martucci: Piano Concerto No.2 in B flat minor, Op.66

Verdi: I due Foscari - Prelude

II. The Immigrant (From "The Godfather, Pt. II")

During Riccardo Muti’s 19-year tenure as La Scala’s music director, his relationship with the Filarmonica della Scala extended beyond the opera pit. The seven-CD set “Riccardo Muti conducts Italian Masters” celebrates their shared Italian heritage with a mixture of much-loved Verdi overtures, modern classics from Nino Rota (“uniformly stunning” – AllMusic Guide) and enticing works from the turn of the century by the likes of Casella, Martucci and Busoni (on an album “successful in every respect”, according to Gramophone). Busoni’s Turandot Suite (like the orchestral works also released here by operatic composers Ponchielli, Catalani and Puccini) is perfectly suited to an orchestra and conductor at home in both dramatic and symphonic repertoires. “How is it possible for so attractive, witty and artful a work to lay neglected for so long?” enthused Gramophone.