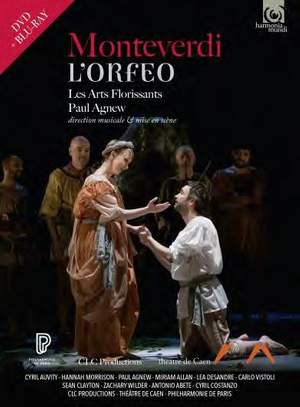 Following on logically from his complete cycle of Monteverdi madrigals, Paul Agnew – here both conductor and stage director – presents his intimate and ‘sacred’ version of the composer’s first opera (and the first great opera in musical history). In a fine collective spirit, the singers and instrumentalists of Les Arts Florissants participate in the drama on equal terms, mingling in a single set that gives increased prominence to the (masterly) lighting and to the protagonists (overwhelmingly moving in their restrained movements and expressions): we are transported to the very heart of Monteverdi’s masterpiece, as if we had fallen into a painting by Nicolas Poussin, caught up in the mystical adventure of two lovers more mythical than ever.

Echoing performance from Monteverdi’s day, instrumentalists are integrated into the action…Their direct interaction with the singers produces an intimate, chamber-like performance, more madrigalian than operatic. Notable among the soloists is Cyril Auvity (Orfeo), whose agile, fervent, tremulous tenor spans the gamut of emotion, from joy to desolation, without ever sounding overblown or histrionic.

All participants prove a shared affinity for democratic music-making…There is a wondrous simplicity and beauty to Agnew’s staging, which looks as if Caravaggio painted an equinox ceremony taking place in a stone circle…Bucolic fun is depicted in a relaxed and natural way: tenor duets are sung with suppleness by Zachary Wilder and Sean Clayton…Cyril Auvity’s tremulous and emphatic singing of the title-role has unstinting dramatic commitment.

All three women are excellent, with the palm going to the mezzo Lea Desandre, whose singing of Speranza and the Messaggiera add to her rapidly accumulating laurels. The instrumental playing is first-rate throughout, though Agnew does not always follow Monteverdi's carefully recorded instrumentation.