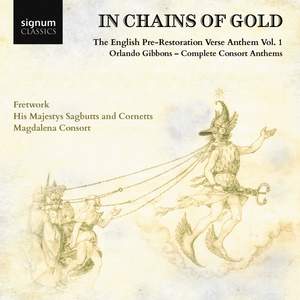 In Chains of Gold: The English Pre-Restoration Verse Anthem, Vol. 1

The synergy of the Magdalena Consort, Fretwork and His Majesty’s Sagbutts and Cornetts, unveils Orlando Gibbons’s Consort Anthems and In Nomines in all their pious glory and passionate devotion…Fretwork... — BBC Music Magazine, February 2018, More…

Gibbons, O: Behold, thou hast made my days

Gibbons, O: This is the Record of John

Gibbons, O: Blessed are all they that fear the Lord

Gibbons, O: Sing unto the Lord

Leading performers of 17th-century music Fretwork, His Majesty’s Sagbutts and Cornetts and the Magdalena Consort (directed by Peter Harvey) combine forces under the artistic direction of William Hunt for this first complete recording of the consort anthems of Orlando Gibbons. Gibbons’ music is one of the artistic glories of the first Stuart reign. Amongst his sacred compositions, verse anthems such as This is the record of John and Behold, thou hast made my days are long acknowledged masterpieces, amongst the greatest in all English sacred music, but best known to most in their setting for choir and organ. Here they are presented together with an array of other great anthems, some of them scarcely known, in their more intricate and colourful versions for consort accompaniment.Following the instruction of such contemporary writers as Morley and Caccini, these radical new performances place communication of text at the forefront, seeking to rediscover the dramatic essence of the verse anthem that made it arguably the most effective musical creation of the English Reformation. With the incisive declamatory skill of several of the UK’s leading period performers, they reveal the extraordinary rhetorical and poetic power of this music, as it might have been heard in the Chapel Royal and the private domestic chapels of early 17th century England

The synergy of the Magdalena Consort, Fretwork and His Majesty’s Sagbutts and Cornetts, unveils Orlando Gibbons’s Consort Anthems and In Nomines in all their pious glory and passionate devotion…Fretwork shine in the In Nomines, relishing exchanges steeped with the references to Taverner, Ferrabosco and Bull.

Subtle, seductively supple and sinuous singing and playing breathe vivid life into works we have grown used to hearing in more massive interpretations.

If something feels unfamiliar, electric almost in its charge, then it’s down to the tuning, which puts the consort up to the perilous heights of A466…[The Magdalena Consort] matches Fretwork’s authentic tuning with intimate forces, whose upper voices include not only trebles and means but also contratenors, taking lines more usually sung now by altos.

The new recording offers a unique collection… very fine contributions all round.