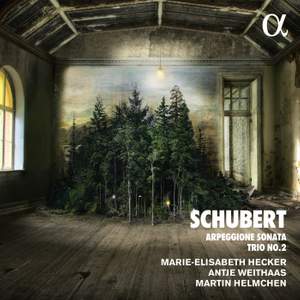 Following a first recording on Alpha devoted to Brahms which garnered much praise – ‘real duo playing’ said Gramophone, while Classica discerned ‘shared music making . . . a world full of nuances and subtlety, boundless sonic imagination (Marie-Elisabeth Hecker), playing of rare intelligence (Martin Helmchen)’ and awarded the disc a ‘Choc’ – the duo is reunited. Its new programme features two summits of chamber music: Schubert’s famous Arpeggione Sonata – named after a now obsolete instrument that was a cross between the guitar and the cello – and his no less celebrated Trio no.2 D929, which achieved even greater popularity thanks to Stanley Kubrick’s film Barry Lyndon.

In the latter, the duo is joined by an eminent musician with whom they enjoy playing, Antje Weithaas, ‘one of the great violinists of our time’ (Fonoforum) and also one of the teachers most sought after by the young generation. For example, she taught Tobias Feldmann, the young violinist recently signed by Alpha.