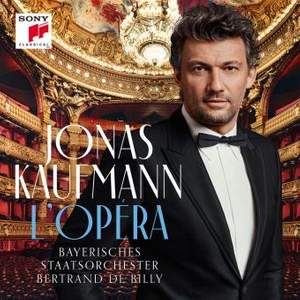 Kaufmann is a consummate artist who rethinks everything that he sings…You can almost forgive the hooded, crooner-like tone that [he] favours when his characters are interrogating their souls.... — BBC Music Magazine, Christmas 2017, More…

Jonas Kaufmann pays homage to a magnificent era of opera that defined musical splendor and elegance, in his new album of 19th-century French opera arias and duets. His selection of music for tenor spans this momentous period, starting with “Rachel, quand du Seigneur” from Halévy’s La Juive (1835), through two of Bizet’s greatest works, “La fleur que tu m’avais jetée” from Carmen (1875) and “Au fond du temple saint” from Les Pêcheurs de perles (1863), by way of Gounod’s “Ah! lève-toi, soleil!” from Roméo et Juliette (1867) and ending with the latest aria “Pourquoi me réveiller” from Massenet’s masterpiece Werther (1892). Plus many more along the way. “The French operatic repertory is very close to my heart,” says Kaufmann. “This fascinating music reflects a unique period in European culture. I didn’t want to choose only highlights for this album but also works and roles that have been key experiences for me. Wilhelm Meister in Mignon, for example, was my first major French role – I sang it in Toulouse in 2001. Carmen and Werther helped to open doors for me. The fact that I sang my first Werther at the Paris Opéra of all places, as a German surrounded by a French ensemble, was undoubtedly rather risky, but I had some excellent guides to help me: répétiteurs, colleagues, conductors and, not least, the recordings of the legendary French tenor Georges Thill.”

Kaufmann is a consummate artist who rethinks everything that he sings…You can almost forgive the hooded, crooner-like tone that [he] favours when his characters are interrogating their souls. At last comes the best. Two magnificent numbers from Berlioz…You can happily exchange a slightly uncertain opening phrase in the aria from Les Troyens for the muscular hero caught between love and duty who emerges a moment later.

Some of the finest singing on the disc comes in the duets. Kaufmann is joined by the classy French baritone Ludovic Tézier for the duet from The Pearl Fishers, their voices blending like coffee and cream, while Sonya Yoncheva is a delicious temptress in an excerpt from Massenet’s Manon.

To my mind, the finest recording he’s made in a decade...it’s the tantalising glimpses of roles which may never feature in Kaufmann’s stage repertoire that are the real plums of this album for me: Berlioz’s Énee, Meyerbeer’s Vasco de Gama and Rodrigue from Massenet’s Le Cid bear testimony to a voice that’s ageing quite spectacularly.

Favourites such as the Flower Song from Carmen, Roméo’s Ah! Lève-toi, soleil (Gounod) and Faust’s Merci, doux crépuscule (Berlioz) are sung with dark, thrilling tone, and he is responsive to dynamics. There’s a hint of strain in Massenet’s Manon duet with Yoncheva, but he floats airy head voice in the Pearl Fishers duet with Tézier.

There should be no carping at his finely judged phrasing, his psychological acuity and, when he hits a sweet spot, sheer seductive swagger. His and Tézier’s searing delivery of the famous duet from Bizet’s The Pearl Fishers is as good as any you will hear on record...As the repertoire gets heavier, so the album builds to a terrific climax.