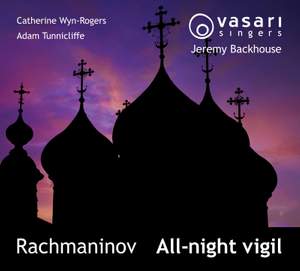 Backhouse is not afraid of relatively slow speeds…and this can pay dividends; but there is the corresponding challenge of maintaining the tension of the musical line…both benefit from the excellent... — Gramophone Magazine, January 2018 More…

Blessed Is the Man

Hexapsalms. Glory to God on High

Glorifying Song of the Resurrection. Teach Me O Lord in the Way of Truth

Magnificat. My Soul Proclaims the Greatness of the Lord

Great Doxology. Glory Be to God on High

Resurrection Hymn (Troparion). This Day of Salvation Has Come to the World

Resurrection Hymn (Troparion). When You Had Risen

Rachmaninov's All-night vigil, Op. 37 (sometimes known as the 'Vespers') is a beautiful and moving setting of texts from the Russian Orthodox Church liturgy. It was composed in 1915 just before the Russian Revolution and is considered by many to be the culmination of an era of Russian sacred music. Rachmaninov was so fond of the work that he requested that the 'Nunc Dimittis' be sung at his funeral. Vasari Singers has known, loved and sung the Allnight vigil for many years, performing it to critical acclaim in concerts in Britain and abroad. Recorded in 2017 to celebrate the 60th birthday of Vasari's conductor Jeremy Backhouse and crowdfunded through the generosity of over 180 supporters, this is a very special addition to the Vasari Media label.

Backhouse is not afraid of relatively slow speeds…and this can pay dividends; but there is the corresponding challenge of maintaining the tension of the musical line…both benefit from the excellent solo contributions of Adam Tunnicliffe…Pronunciation is very good, though Englishness does slip through from time to time.

These clear, light voices shimmer – cleverly bringing all the colour and texture to the surface without the need for vocal heft.