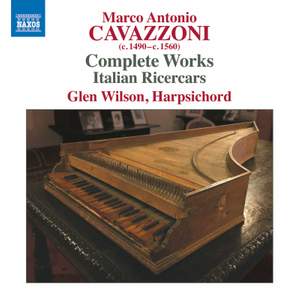 Cavazzoni, M A: Plus ne regres

Marco Antonio Cavazzoni private harpsichordist to the Duchess of Urbino and Pope Leo X, friend of Titian and Bembo composed some of the most important milestones in the history of instrumental music. They were published in Venice by Vercellese (1523), the second edition of Italian keyboard music after that of Andrea Antico [Naxos 8.572983]. Usually assigned to the organ, they are restored here to the harpsichord where they originally belonged, as explained in an online essay by Glen Wilson. Contemporary examples further illustrate the fascinating development of Cavazzonis major form, the ricercar. The project celebrates the 500th anniversary of the harpsichord on the cover (the worlds oldest), which was owned by Leo X and undoubtedly played on by Cavazzoni.

A disc of great importance.