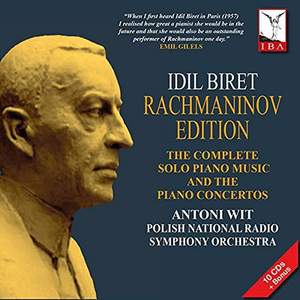 Idil Biret was introduced to Rachmaninov as a composer and performer at an early age in Instanbul by an uncle. She greatly admired his performance style and compositions and felt an immediate affinity to him. It was an encounter with the great Emil Gilels at the home of Nadia Boulanger in 1957 which led to her career in Russia where she often played Rachmaninov’s works. After hearing Biret play for him in Paris, Gilels asked Biret if she would like to perform in the USSR. She gladly said “yes” and soon an invitation came for an eight concert two week tour there in 1960 when she was only nineteen years old. After her first recital in Moscow, Goskonzert extended the tour to one month and added eight more concerts to make a total of sixteen. Biret made many more tours in the Soviet Union afterwards playing around 100 concerts there over the years. This release features Biret performing Rachmaninov’s complete solo piano music, as well as his piano concertos.