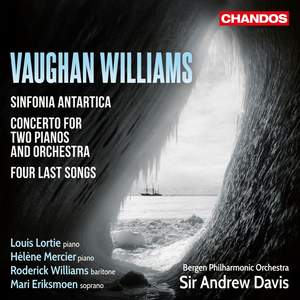 Either [Lortie] or Hélène Mercier could probably polish off the original [Concerto] by themselves, but their partnership develops its intensity without strain, particularly attractive in rich... — BBC Music Magazine, Christmas 2017, 5 out of 5 stars More…

James listens to the final instalment in a cycle begun by the great Richard Hickox - Vaughan Williams' evocative Sinfonia Antartica, with the Bergen Philharmonic Orchestra.

This is the eagerly awaited final volume in our historic series of Vaughan Williams’s Symphonies, started about twenty-five years ago by the late Richard Hickox, and recently continued by that other expert in British repertoire, Sir Andrew Davis. The album features an exceptional cast and a rare combination of repertoire. While the indefatigable piano duo Louis Lortie and Hélène Mercier tackle the virtuosic Double Piano Concerto, the baritone Roderick Williams OBE offers breathtaking interpretations of the rarely heard, yet passionate Four Last Songs, in Anthony Payne’s delicate and imaginative orchestration, premiered at the BBC Proms only four years ago. Vaughan Williams based the disc’s centrepiece, the majestic Sinfonia Antartica, on music he had written for the film Scott of the Antarctic only a few years before, stunningly evoking the implacable, frozen landscape of the Antarctic. All are supported by the impeccable Bergen orchestra and choirs and recorded in surround-sound. This album is a very special one, as is the now complete series.

Either [Lortie] or Hélène Mercier could probably polish off the original [Concerto] by themselves, but their partnership develops its intensity without strain, particularly attractive in rich SACD sound. Davis is at his most dynamic, and the Bergen Philharmonic playing is characteristically crisp…Orchestrated by Anthony Payne [The Four Last Songs are] attractive if unexceptional, but Roderick Williams does evoke their essential tenderness.

[Concerto] excellent depth and weight of tone in the outer movements and beautiful touch in the ravishing central Romanzaand final cadenza. The Bergen Philharmonic Orchestra accompany superbly and give a fine performance of the symphony too.

Davis reveals the element of banter, of entertainment and the showmanship of a swinging waltz. In the Fuga Boyd demonstrates the discourse between pianos and orchestra well but in an atmosphere of exactitude and tension, even snarling at times. His waltz is wilder, more abandoned. Lortie and Mercier reveal not just the power but the lyricism of the cadenzas, Duo Tal and Groethuysen remain stony throughout. In sum, Davis sets a new benchmark for the recordings of all three works.

The Bergen Phil finds a clear affinity with the Sinfonia Antartica...There’s an inexorability about this performance and a strong tragic undertow that makes it a compelling listen throughout. Davis authoritatively builds up the tension without any fussiness...balm is supplied by the cultivated baritone of Roderick Williams in Vaughan Williams’s little-known Four Last Songs.