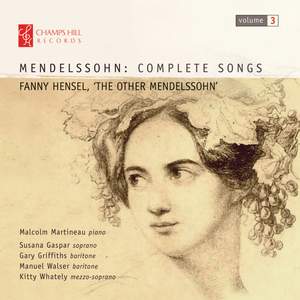 For this third volume in a complete survey of Mendelssohn songs, Malcolm Martineau shines the spotlight on ‘the other Mendelssohn’, with a complete volume of songs by his sister Fanny Hensel. Her professional attitude to domestic music-making is decribed by Martineau as ‘revolutionary’ and her early death, within five months of her celebrated brother, was a great loss to the musical world. Despite his enthusiasm and support for her work, Felix Mendelssohn did not approve of her publishing her work – but thankfully for us she defied it, daring to publish her Opus 1 songs under her own name a year before her death in 1847. For many years her music was appraised in the context of her brother’s work, considered as lesser clones of his output. Now that more of her work is known, that opinion has changed thanks to work by scholars including Steven Rogers pointing to Fanny’s Bachian voice-leading in numerous passages, her complex interweaving of voice and piano parts, and more intense chromaticism than her brother achieves. The settings are of spring songs, of poetry by Eichendorff, Lenau, Schiller, Goethe and even Heine who she knew personally but did not like, but admitted to be a great poet. Malcolm Martineau has assembled, as always, a cast of wonderful young singers for this refreshing and important repertoire. Both volumes one and two have been highly critically acclaimed for both performance and sound quality.

Martineau’s programme is carefully crafted to emphasise points of contrast not only between individual songs but also between four very different singers…Gaspar’s silvery soprano sounds exquisite in ‘Die Mainacht’ and unearthly in ‘Die frühen Gräber’…Martineau binds everything together, meanwhile, with playing of great dexterity and eloquence.