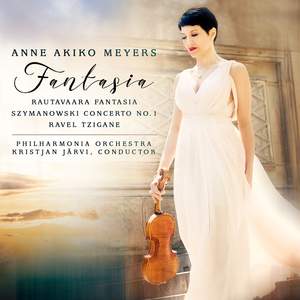 Like many of his later works [the Fantasia is] elegiac in character, with a strong, lush tonal base: a warm cushion of orchestral sound supporting the continuous solo line…Meyers plays with intensity... — BBC Music Magazine, Christmas 2017, 3 out of 5 stars More…

Superstar violinist Anne Akiko Meyers is one of today’s most in-demand classical performers. Beloved by audiences around the world, with a reputation for groundbreaking recital programs and important commissions, Fantasia marks her 35th studio album and is one of her most important projects to date.

Meyers has been Billboard’s Top Selling Classical Instrumentalist of the year and has had numerous albums reach the Number 1 spot on Billboard’s Traditional Classical Chart. Her latest album captures the rare combination of incredible virtuosity and poetic color with iconic works by Ravel, Einojuhani Rautavaara’s last major work, written for Meyers, and Karol Szymanowski’s sensuous Violin Concerto No. 1.

The title track, Fantasia is legendary Finnish composer Einojuhani Rautavaara’s premiere posthumous recording and last major work for violin and orchestra. Ms. Meyers traveled to Finland and worked with the composer on it shortly before he died. Karol Szymanowski’s sensuous Violin Concerto No. 1, dedicated to Polish virtuoso violinist, Paul Kochanski, is a dazzling display of exotic melodies, and Ravel’s iconic Tzigane is a virtuoso showpiece that conjures Hungarian gypsy music, and premiered almost a century ago.

“Anne Akiko Meyers is the coolest thing to happen to the violin since Stradivari.” – The Denver Post

“Anne Akiko Meyers is one of the most adventurous soloists on the international scene today.” – Chicago Classical

“Playing that flows from the heart” – The New York Times

Like many of his later works [the Fantasia is] elegiac in character, with a strong, lush tonal base: a warm cushion of orchestral sound supporting the continuous solo line…Meyers plays with intensity throughout, and it’s all very beautiful, but it’s not always easy to find a sense of direction in the music itself.

[She] is a touch too polite for Ravel’s fiery gypsy. There’s plenty of style to her playing, though, and her closely recorded pizzicatos pop and sizzle. Meyers gives a highly persuasive account of Szymanowski’s First Violin Concerto, ravishingly supported by Kristjan Järvi and the Philharmonia Orchestra. Swathed in silky tone, Meyers caresses the highly perfumed solo line in sensuous fashion.