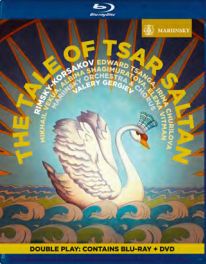 Tsanga (who sadly died in 2017, at only 37) is a smooth basso cantate Saltan; soprano Irina Churilova as his wronged wife sings beautifully but not very expressively…[Shagimuratova] provides... — BBC Music Magazine, April 2018, 4 out of 5 stars More…

As a companion to 'The Golden Cockerel', Valery Gergiev presents a second Rimsky-Korsakov opera on the Mariinsky Label, 'The Tale of Tsar Saltan'. Rarely staged and the only complete performance available on Blu-ray or DVD, this release is part of Valery Gergiev’s mission to showcase the breadth and depth that Russian music has to offer, capturing Rimsky-Korsakov’s adventurous and magical work for posterity. This production features a cast of the Mariinsky’s finest singers, including sopranos Irina Churilova, as Tsaritsa Militrisa, and Albina Shagimuratova as The Swan-Princess; and bass-baritone Edward Tsanga, who died suddenly in early 2017, in the lead role.

Originally composed to celebrate Pushkin’s centenary, the full title of the work - 'The Tale of Tsar Saltan, of His Son the Renowned and Mighty Bogatyr Prince Gvidon Saltanovich, and of the Beautiful Princess-Swan' - is indicative of the fantastical content of the opera. It is an old-fashioned Russian treat for the eyes and the ears from the country’s most long-standing musical institution. Filled with colourful music, typical of Rimsky-Korsakov’s style, it is also the source of the instantly-recognisable 'Flight of the Bumblebee', which arrives when the magic Swan-Princess changes Prince Gvidon Saltanovich into an insect.

"A rare old-fashioned Russian treat for the eyes and the ears", British Theatre Guide

"This tale, of Tsar Saltan and the others, is truly fantastic" Classical Source

Tsanga (who sadly died in 2017, at only 37) is a smooth basso cantate Saltan; soprano Irina Churilova as his wronged wife sings beautifully but not very expressively…[Shagimuratova] provides the best singing as a radiant-toned Swan Princess, if less ethereal than others I’ve seen in this staging. Altogether, this is a fine performance of another Rimsky rarity, well worth adding to one’s collection.

It’s as traditional a staging as is possible to imagine...Costumes are as bright as poster paint...[Gergiev] applies his magic touch to Saltan’s glittering score, his Mariinsky band on top form. He has a fine cast, led by the late Edward Tsanga...[whose] Saltan is firm-voiced and authoritative...The stellar performance, however, comes from Albina Shagimuratova, radiant of voice as the Swan-Princess.

What makes this required viewing is the exceptional quality of the principals. First among equals has to be Irina Churilova's radiantly sung, touchingly tranquil Tsarina Militrisa, a vocal masterclass which held this listener spellbound. Albina Shagimuratova's creamy Swan-Princess and Mikhail Vekua's ardent Price Gvidon are almost as good. Thanks to these…outstanding vocalists - and despite the workaday production, bitty video direction and some rocky camera work - The Tale of Tsar Sultan finally comes across with colours blazing.

Rimsky’s score glitters in best fairytale mode, too, and Gergiev’s performance makes it shimmer where it should. There’s some good singing, especially from Irina Churikova as the Tsarina and Albina Shagimuratova as the Swan-Princess.