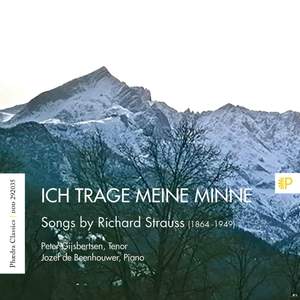 I. All mein‘ Gedanken

This is the fourth Phaedra Album featuring the young Dutch tenor Peter Gijsbertsen. Well-known and less well- known songs, an attractive anthology of Richard Strauss’s fascinating lied repertoire. Peter Gijsbertsen is embarking on an international career, which is taking him all over Europe.

His accompanist is Jozef de Beenhouwer, one of Flanders’ most prominent pianists, who was for several years one of the accompanists at the Queen Elisabeth Competition. Together with mezzo soprano Lucienne van Deyck he teaches the lied course at the Royal Flemish Conservatory of Music of Antwerp (at present part of the Antwerp School of Arts). In 1993 he was awarded the prestigious Robert Schumann Prize of the City of Zwickau (Federal Republic of Germany).