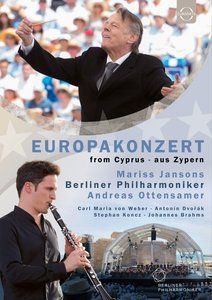 The Europakonzert 2017 brought the Berliner Philharmoniker to one of the most mythical places in history: Paphos, birthplace of Aphrodite. Andreas Ottensamer was the soloist with his interpretation of Weber‘s highly elaborate Clarinet Concerto. The Berliner Philharmoniker, under the baton of Mariss Jansons, also played Dvořák’s 8th Symphony, an unusually optimistic and light-hearted composition.

The Berliner Philharmoniker celebrate their founding day (May 1st, 1892) in a European city of cultural significance every year.

This year’s concert takes the orchestra to one of the most mythical places in its history: Paphos, birthplace of Aphrodite.

Latvian conductor Mariss Jansons returns to the Berliner Philharmoniker’s rostrum once again, while the orchestra’s principal clarinettist Andreas Ottensamer is the solo clarinettist for the 2017 Europakonzert.

In front of the city’s Byzantine castle, the Berliner Philharmoniker play works by Carl Maria von Weber and Antonín Dvořák , which impress with their lyrical zest and warm colours.

Andreas Ottensamer performs his interpretation of von Weber‘s Clarinet Concerto, which is known as a much more elaborate composition than Mozart‘s clarinet concertos owing to the cooperation between the composer and clarinettist Joseph Heinrich Bärmann.

The concert concludes with Dvořák‘s 8th Symphony, an unusually optimistic and light-hearted composition.