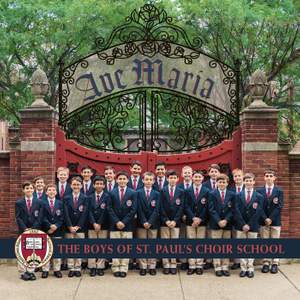 Stanford: A Song of Wisdom

Bursting with the transcendent sounds of this choir of boys and men coupled with the glorious acoustic of St. Paul's in Harvard Square, every selection on Ave Maria tells a story. Each beautiful and interesting work has its own history. Perhaps none more significant than that of the inspiration for Palestrina's Missa Pappae Marcelli or of the extraordinary depiction of the Magi from the East in 'Reges Tharsis,' on to the vivid and dramatic use of harmony in Bruckner's Virga Jesse. One thing is clear, this beautiful music has a stream of inspiration running clearly throughout. A must have for quintessential boy-choir category in the music collection. Ave Maria will be the second international release for the Choir School - who topped the Billboard classical charts, and became a media favourite with their 2014 release Christmas in Harvard Square. Founded in 1963 by Dr. Theodore Marier, an internationally acclaimed choral scholar, Saint Paul’s Choir School is the premiere musically intensive boy choir school, which educates choristers in grades 4 through 8 in the United States. The Choir School seeks to embrace the great cathedral school tradition as it unites a rigorous musical and academic cur-riculum preparing each student to grow and flourish in a dynamic and changing world.