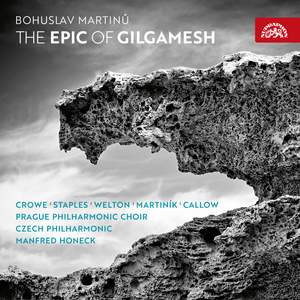 Martinů: The Epic of Gilgamesh

All life is here in compressed mastery. Idiomatically conducted by Manfred Honeck and vividly recorded live in Prague’s Rudolfinum, this is the definitive performance of a 20th-century choral... — BBC Music Magazine, February 2018, 5 out of 5 stars More…

Martinů: The Epic of Gilgamesh

The music Martinů created during the last decade of his life demonstrates his penchant for religious and spiritual texts. The idea of setting the epic written 4,500 years ago matured in the composer for 15 years. Although differing boldly from the avant-garde of the 1950s, it is an utterly modern piece, reflecting Martinů’s intense interest in Baroque music and the Notre Dame school. The oratorio, premiered on 23 January 1958 in Basel, was a tremendous success. Its performance in Prague in January 2017 by the Czech Philharmonic and a superb international team of soloists, conducted by Manfred Honeck, brought back to life the work’s English version, based on Reginald Campbell Thompson’s translation.

“I have realised that, notwithstanding the immense progress we have attained … the questions I have come across in the literature of a nation we refer to as primitive still accompany us. They are the questions of friendship, love and death. In the epic of Gilgamesh, we encounter a very acute and almost anxiously distressful yearning to find the answers, which we have been seeking in vain to the present day.”

All life is here in compressed mastery. Idiomatically conducted by Manfred Honeck and vividly recorded live in Prague’s Rudolfinum, this is the definitive performance of a 20th-century choral masterpiece.

Musically, the score is recognisably Martinů’s, minus that overt joie de vivre but plus a sprinkling of the apocalyptic…We get all the score’s churn and urgency, and tender luminosity too…Of the soloists, Derek Welton makes the most impact, [perhaps because of the music he is given…Callow is a galvanising narrator.

Simon Callow’s narration may be a tad mannered, but the soloists — especially Lucy Crowe’s radiant soprano and Derek Welton’s youthful “Wagnerian” bass — are excellent, while Honeck’s fervent belief in the work is evident in the thrilling choral singing and orchestral playing he elicits from his epic forces. A discovery.