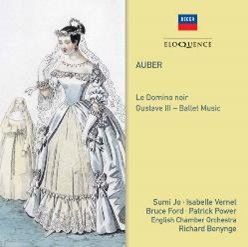 Through scholarship, performance and recording, Richard Bonynge has done more than any other modern-day musician to advance the cause of Daniel-François-Esprit Auber, the foremost composer of opéra-comique in nineteenth-century Paris. What he wrote was ‘Simple, joyous and unsophisticated music,’ according to Bonynge: this is his sole recording of a complete opera by Auber.

Le Domino Noir is a tale of amorous intrigue in royal Madrid, set in the theatrically promising context of a masked ball and a convent. Drama and libretto were fashioned by Eugène Scribe, who later worked with Rossini, Bellini, Verdi and many others, but he formed an especially long-lasting and fruitful partnership with Auber, and this is one of their joint masterpieces: the embodiment in music and drama of the witty, polished, and worldly Parisian life of the time. The music sparkles; it has lightness and facility; it is essentially graceful and elegant.

When it was first released in 1995, this Decca recording was universally welcomed as a significant marker in the revival of Auber’s reputation: he was writing for singers of virtuoso technique with a lightness and grace that is not commonly found in our own time, but Bonynge assembled a cast which was more than equal to the challenge.

In the booklet notes, Jeremy Commons sets Le Domino Noir in the context of Auber’s long career and his happy partnership with Scribe. There is also a synopsis and a performance note in which Bonynge explains his decisions to cut and reshape the dialogue and to elaborate some of the vocal lines after the common practice of Auber’s day. A complementary issue on Eloquence (4827730) surveys Bonynge’s quarter-century of Auber on record in arias, overtures and ballet music.

Sumi Jo is an Angèle with the agility to handle fancy ornamentation and a range that reaches the stratosphere of high D. Bruce Ford handles the high tessitura of his part with little apparent strain and makes a good sound. The rest of the cast … are equal to the vocal and dramatic demands of their roles.

A winner, for the excellent performance and for Auber’s delightful score … The playing of the ECO under Bonynge is a constant pleasure as well as a revelation … Sumi Jo is an admirable Angele, her voice warm, supple and untiring throughout the long and taxing role… On no account miss Le Domino Noir.

Bonynge makes the ideal advocate, moulding melodies, springing rhythms and aerating textures to make the music sparkle from first to last. … The recording is among Decca’s most vivid.