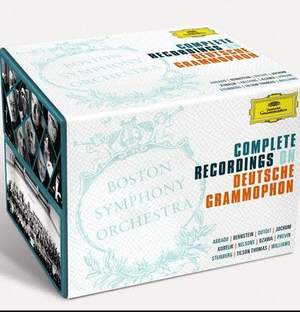 Takemitsu: A Flock Descends into the Pentagonal Garden

Williams, John: Concerto for Violin and Orchestra in Memory of B.R.W.

The BSO’s 1969-70 season was a landmark year for the orchestra with the arrival of distinguished conductor William Steinberg and the start of their recording legacy with DG. The label immediately reinforced its commitment to the BSO, spearheading the build of a dedicated control room in the basement of Symphony Hall. DG’s Boston strategy also saw them bring the company’s top conductors to the BSO.

From the start, Deutsche Grammophon also committed to recording a wide repertoire with the Boston Symphony Chamber Players (founded in 1964 and the first chamber ensemble made up of a major orchestra’s principal players).

The marriage between DG and the BSO saw recordings made under Steinberg, Thomas, Abbado, Kubelik, and also under DG stalwart Eugen Jochum, and Boston’s own Leonard Bernstein under his new exclusive contract with DG. Steinberg’s dynamic young successor Seiji Ozawa further reinforced their dominance as the leading orchestra in America through a number of critically acclaimed recordings. DG’s current collaboration with Andris Nelsons and the BSO continues this remarkable recording legacy with Shostakovich’ complete symphonies.