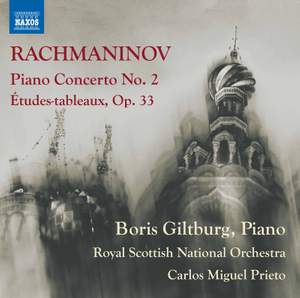 Giltburg paces the concerto’s solo opening crescendo beautifully…In terms of sheer pianism, the ensuing saga is frequently breathtaking. It’s not only the fleetness of the fingerwork, utter clarity... — BBC Music Magazine, December 2017, 4 out of 5 stars More…

The Russian-born Israeli pianist talks to Katherine about his recording of the Second Piano Concerto, out tomorrow on Naxos.

Rachmaninov’s Piano Concerto No. 2 is one of the most passionate and beloved concertos in the repertoire, its lyricism and virtuosity charting a trajectory from darkness through idyll to dazzling triumph. The Etudes-tableaux, Op. 33 are richly characterized musical evocations, expressive and often explosive, that reflect a more angular, modern aspect. The Royal Scottish National Orchestra was formed in 1891 as the Scottish Orchestra and became the Scottish National Orchestra in 1950. It was awarded Royal Patronage in 1977. Throughout its history the orchestra has played an integral part in Scotland’s musical life, including performing at the opening ceremony of the Scottish Parliament building in 2004. Many renowned conductors have contributed to its success, including George Szell, Sir John Barbirolli, Walter Susskind, Sir Alexander Gibson, Neeme Jarvi, Walter Weller, Alexander Lazarev and Stephane Deneve. In 2012 the RSNO welcomed British-Canadian musician and conductor Peter Oundjian as its latest music director and Danish conductor Thomas Sondergard as principal guest conductor. The RSNO has a worldwide reputation for the quality of its recordings, receiving two Diapason d’Or de l’annee awards for Symphonic Music and eight Grammy Award nominations over the last decade.

Giltburg paces the concerto’s solo opening crescendo beautifully…In terms of sheer pianism, the ensuing saga is frequently breathtaking. It’s not only the fleetness of the fingerwork, utter clarity and beauty of tone, but the imagination that goes with it, the placing of pointillist harmonic detail and, when appropriate, a surrender to the grand sweep of the music.

Giltburg certainly has something fresh to say in Rachmaninov’s Second Concerto...and he says it elegantly and eloquently...For all the admirable attention to detail, one of the most appealing aspects of this performance is its grand trajectory...Giltburg must be thoroughly conversant with Rachmaninov’s recorded legacy but his readings are far from simulacra. Rather than imitating Rachmaninov, Giltburg seems to imbibe the composer’s spirit.

Giltburg’s account is successful on its own terms and the accompaniment from the Royal Scottish National Orchestra is beautifully rendered. Giltburg’s playing of the eight extant numbers of the Études- Tableaux is a delight.