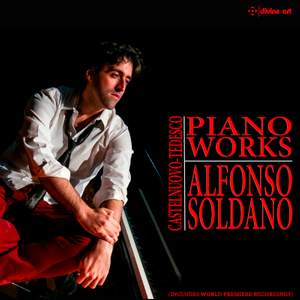 Mario Castelnuovo-Tedesco is best known for two things – his evocative guitar music, and his work during his long association with the movie industry in Hollywood. His extensive body of piano music has been largely neglected despite the fact that it is exceptional, impressionistic, and in the best post-Romantic tradition of ‘lighter’ music – though only relatively ‘light’ in that it is written in traditional harmony. Many of the works in this album are receiving their first recording. Alfonso Soldano, the last pupil of Aldo Ciccolini, is a brilliant Italian pianist whose debut recording of the piano music of Sergei Bortkiewicz attracted worldwide acclaim. He has just been appointed Artistic Director of the Aldo Ciccolini Academy in Trani, Italy.