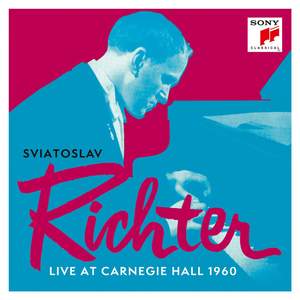 There’s some duplication of repertoire, but that’s tolerable in view of the interpretations, especially of Beethoven, Prokofiev and Rachmaninov. Has any other pianist combined such colossal power... — The Times, 8th December 2017 More…

Sviatoslav Richter's first North American tour in 1960 solidified his international standing as one of the 20th century’s most exciting, provocative and original Russian pianists. His Carnegie Hall debut consisted of five sold-out recitals within twelve days in October, with two recitals added in December. The complete recordings from these concerts - previously only available in two separate editions: Sviatoslav Richter - The Complete Album Collection and Great Moments at Carnegie Hall - are gathered together for the first time in one collection of thirteen CDs in a slipcase box including a booklet with archival photos and a new essay by Carnegie Hall archivist Gino Francesconi.

The October 1960 recitals originally appeared on mono LPs in the United States (Columbia Masterworks) and Japan (Sony). They did not last long in the catalog, however, and became highly sought-after collectors’ items. By contrast, RCAs complete stereo master tapes from the December 23rd and 26th concerts came to light after Richter’s death in 1997. The recordings reveal the unusual breadth of the pianists enormous repertoire, including such Richter benchmarks as the Prokofiev Sixth and Eighth Sonatas, Schumann’s C Major Fantasie, Rachmaninov Preludes, Beethoven Sonatas, Scriabin’s Fifth Sonata, plus works by Haydn, Schumann and Debussy.

The 1960 Carnegie Hall series not only captures Richter in his prime, but also preserves his daring, unfettered artistry in its most honest, authentic manifestation, exactly as his audiences experienced him: live and unedited, and without a net.

There’s some duplication of repertoire, but that’s tolerable in view of the interpretations, especially of Beethoven, Prokofiev and Rachmaninov. Has any other pianist combined such colossal power and spirituality?