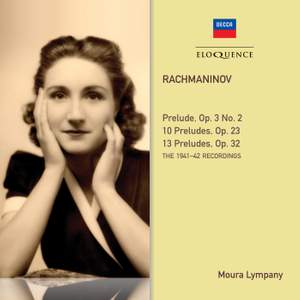 Miss Lympany’s performance is a remarkable achievement for which lover of piano music are deep in her debt. — Gramophone Magazine, December 1943 More…

The first ever recording of Rachmaninov’s complete preludes (1941–42). Released on CD for the first time.

Throughout a career spanning over 60 years, Dame Moura Lympany was closely associated with the music of Rachmaninov. It began as an unlikely meeting of minds and fingers: what was this slight and beautiful young Englishwoman doing with music that needed the composer’s own huge hands to span its ninths and tenths, written by a man immortalized in Stravinsky’s quip, ‘a six-and-a-half-foot scowl’?

In 1945, two years after the composer’s death, the record producer John Culshaw, then still a serving lieutenant in the Royal Navy, wrote an essay celebrating and defending Rachmaninov in the face of scepticism and reserve from English audiences. Culshaw begged to differ, and among the recordings he cited to make his point, Moura Lympany’s first – indeed, pioneering – set of the Preludes took pride of place. She was owed ‘a debt of gratitude’, he remarked, for undertaking ‘a considerable task’. ‘Music so sincerely conceived and so perfectly written can never die,’ and posterity has proved him right beyond all possible expectation.

The recordings were made by Decca in sessions between October 1941 and August 1943, and then issued month by month on individual 78 rpm records, with two preludes per disc. The release of the third 78 was welcomed by the long-standing and maverick editor of Gramophone, Compton Mackenzie, with a clerihew: ‘Miss Moura Lympany/Avoids any suggestion of the timpani/Or of bringing a pan in of/Tin to play Rachmaninov.’ The composer himself had recorded only seven Preludes; Lympany’s colleague, Eileen Joyce, had done six of them.

Lympany went on to make two more celebrated recordings of the Preludes, in 1951 (reissued by Decca in 2004) and again in 1993, for Erato. The luminous passage work, vivid palette of colours, and considerable reserves of power for which she was often celebrated in Rachmaninov: all these qualities were present in abundance in her first recording, which now receives its first release on CD – a major addition to Lympany’s discography.

This Eloquence release is further enhanced by many, previously unpublished photographs of Lympany. The booklet also contains a detailed appreciation of her art, and of the context of this landmark in gramophone history, written by the piano historian Stephen Siek.

Miss Lympany’s performance is a remarkable achievement for which lover of piano music are deep in her debt.

Lympany’s is a unique achievement...From the first notes of the famous Prelude in C sharp minor to the final Prelude of Op 32, you feel in safe hands, knowing that nothing will be exaggerated or sentimentalised, agogics and dynamics faithfully translated, in performances that take no account of the inhibiting power of the red light...One is left wondering why such a recording has taken so long to come back into circulation.