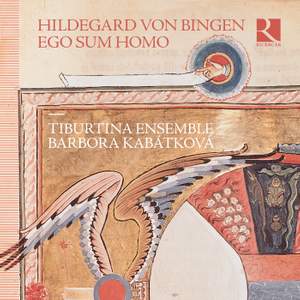 The nun of the Rhine is truly back on song with this offering by the Prague group, the Tiburtina Ensemble. Most of her music is in plainsong style, but that does not mean it is unoriginal or... — BBC Music Magazine, December 2017, 4 out of 5 stars More…

The dramaturgy of the project is inspired by the life philosophy of Hildegard von Bingen as is preserved in her musical and literary work. On the one hand we can perceive Hildegard as a mystic and saint woman, on the other hand as a strong abbess and politically gifted person. Those two points of view are the most important in the interpretation of her concept of human being. Her music and visions are full of humanity and divinity as well, it inspires me to call the concert programme “Ego sum homo” (I’m the man). The female vocal ensemble, Tiburtina, was established in 2008 from former members of the Schola Benedicta ensemble. It is built on its tradition and goes on to interpret western plainchant, medieval polyphonic music and contemporary music.

The nun of the Rhine is truly back on song with this offering by the Prague group, the Tiburtina Ensemble. Most of her music is in plainsong style, but that does not mean it is unoriginal or prosaic. O tu illustrate (in praise of the Virgin Mary), for example, is extraordinarily rhapsodic, inventive and wide ranging, and it draws deftness and suavity from the singers.

The group is entirely of women with a particular interest in monophonic music…they are all trained singers, and most of them also have a substantial career as oratorio soloists. So their ensemble sound is rich, with the occasional touch of vibrato…the music of Hildegard is presented responsibly but with a newly minted colour to the discreet instrumental accompaniments. It is an eminently worthwhile addition to the Hildegard discography.