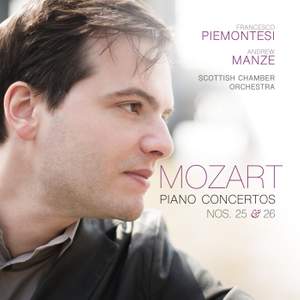 Piemontesi’s playing is mostly magnificent, with crystalline clarity, radiant tone and eloquent phrasing. In the fine and intriguing cadenzas, he shines with surety of purpose — BBC Music Magazine, October 2017, 3 out of 5 stars More…

Francesco Piemontesi is a pianist of exceptional refinement of expression, which is allied to a consummate technical skill. He has performed Mozart extensively recently, including a critically acclaimed 2015 BBC Prom, a Mozart cycle at London’s Wigmore Hall which commenced in January 2016 and continues in 2017 and Mozart concertos with the SCO. The Swiss pianist enjoys particular insight into Mozart gaining a useful ‘love of detail’ from his teacher Alfred Brendel, who was himself renowned for his masterly interpretations of Mozart. This recording couples consecutive yet contrasting works from Mozart’s Vienna period: K. 503 represents the longest and most substantial of his concert masterpieces and K. 537 provides the soloist with an audience-pleasing cadenza.

Andrew Manze has rapidly emerged as one of the most stimulating and inspirational conductors of his generation. Manze’s extensive and scholarly knowledge of the repertoire, together with his rare skill as a communicator and his boundless energy, mark him out. The SCO is a world-renowned orchestra with an outstanding reputation for Mozart; its extensive discography features Robin Ticciati, Charles Mackerras, Elizabeth Watts and Ingrid Fliter.

Piemontesi’s playing is mostly magnificent, with crystalline clarity, radiant tone and eloquent phrasing. In the fine and intriguing cadenzas, he shines with surety of purpose

A virtuoso display of individual talents.

His sympathy with the style and ethos of the Salzburger’s music simply sings from the speakers. There is intimacy rather than inwardness to these chamber-scale performances; Piemontesi knows he’s the star but is sensitive enough to realise that he shares a firmament with the orchestral soloists, despite being ever so slightly spotlit in the miking..,More Mozart from these quarters is eagerly awaited.

Everything that I admired about Piemontesi's previous recording - intelligent, articulate phrasing, tidy passagework and absolute precision in the faster sections - is brought across to these performances...I constantly marvelled at the flexibility of his left hand, with every semiquaver perfectly in place, performed with crystal clarity. It's such a graceful, clean sound, and never smudgy.

a Mozartian to cherish. It’s hard to fault his sense of line, structure and deft approach to detail...Yet Piemontesi’s polished playing is alert with exactly the kind of spontaneity essential to great Mozart performance. Lithe and without fuss, the Scottish Chamber Orchestra makes clear from the opening bars that this is historically informed Mozart with an updated feel.

This is far from a superfluous Mozart concerto recording, and it announces an important new Mozart interpreter.

Both pianist and conductor bring a high intelligence to bear and make this often weighty and sometimes almost Beethovenian approach to Mozart fully absorbing.