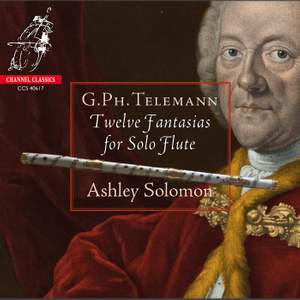 While these Fantasias are well represented on record not all competitors realise the element of fantasy with such intuitive and spontaneous flair as flautist Ashley Solomon. He rings the changes... — BBC Music Magazine, February 2018, 3 out of 5 stars More…

‘This recording offers the listener a rare opportunity to hear two unique baroque flutes, both made in 1760 alongside my favourite modern copy. In combining all three on this recording I hope it opens a new sound world for the listener and breathes fresh life into these well-known works by Telemann. (...) Telemann’s twelve flute fantasias remain a challenge for today’s players, as they were in the eighteenth century. He left us some of the most inventive, musically original Baroque music for solo flute, covering the widest possible range of expression in the shortest amount of time, and designed for both performance and instruction.’ Ashley Solomon (from: liner notes)

As Director of Florilegium much of Ashley’s time is spent working and performing and recording with Florilegium, the ensemble he co-founded in 1991. He also records as a solo artist with Channel Classics and his recording of the complete Bach’s Flute Sonatas was recently voted the best overall version of these works on either modern or period flute by Gramophone Magazine (February 2017): ‘Solomon’s luminous tone and unfussy command of the complicated melodies conflate into something utterly beautiful. Slow movements are soulful in their infinite variety, fast ones are clever and with a wealth of invention behind them.’

While these Fantasias are well represented on record not all competitors realise the element of fantasy with such intuitive and spontaneous flair as flautist Ashley Solomon. He rings the changes between two flutes that are almost contemporaneous with the music and a third which is a modern copy of an instrument from Telemann’s own time.

Solomon’s opening note, played on a grenadilla wooden flute modelled on an instrument from 1750, is just astonishing. It’s so warm, grainy, broad and breathy that it sounds more like a low recorder than a modern flute...Solomon makes [the Fantasias] dance and sing, he makes them spacious. The articulation is immaculate, the rhythms are buoyant.