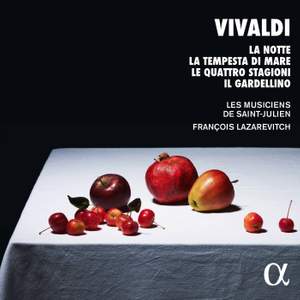 In the course of his recordings for Alpha, François Lazarevitch has explored the music of the Baroque and of oral and popular traditions. After Scottish and Irish music, airs de cour and Baroque suites and sonatas, he stops off in Vivaldi’s Italy. With him, of course, he has his cargo of rare instruments, including the musette de cour (a more sophisticated form of bagpipe) which he uses here to perform Spring from The Four Seasons, in an astonishing and very convincing version transcribed by the great virtuoso wind player of the reign of Louis XV, Nicolas Chédeville. Lazarevitch himself has arranged the other Seasons for the transverse flute, following a frequent eighteenth-century practice. A new angle on these evergreen masterpieces. As François Lazarevitch says: ‘I want to explore all the early sources in depth in order to challenge my performance practice of today and enrich it with an understanding of the style and the naturalness of period theory and phrasing. When I take tackle old Scottish and Irish music, it is with the aim of retracing this path.’ The rest of the programme is devoted to other favourite pieces by Vivaldi, this time originally written for flute.