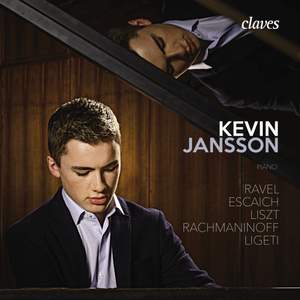 Kevin Jansson (born August 2000) is emerging as one of the finest musicians of his generation in Ireland. A student of Mary Beattie at the CIT Cork School of Music he has been the winner of numerous awards at competitions in both Cork and Dublin taking five first prizes in different categories at Ireland’s most prestigious classical music festival Feis Ceoil in 2015.

He gave his first piano recital at the age of 12. One year later he made his concerto debut during the Cork International Choral Festival performing Mozart’s Piano Concerto in D Minor with the CIT Cork School of Music Chamber Orchestra under the direction of Geoffrey Spratt. In 2014 he was one of 12 young pianists selected from around the world to participate in the Allianz Lang Lang Foundation Music Camp in Barcelona culminating in a concert masterclass with Lang Lang.

Kevin has participated in the William Finlay Mentoring Programme for Gifted Pianists run by the Dublin International Piano Competition. He has played at numerous festivals throughout Ireland including the West Cork Chamber Music Festival, the Westport Festival of Chamber Music and also at the launch of the New Ross Piano Festival. He has also performed at the National Concert Hall Ireland on several occasions. In August 2016 Kevin was a guest performer at the Dinard Music Festival in France.

Attending masterclasses in Ireland and throughout Europe Kevin has played for many eminent pianists and teachers including Alexei Grynyuk, Lang Lang, Joseph Moog, Pavel Nersessian, John O’Conor, Ewa Poblocka, Wolfram Schmitt-Leonardy and Andreas Weber. In February 2016 he was the youngest participant and joint winner of the Thierry Scherz prize at the Sommets Musicaux de Gstaad Festival in Switzerland which led to this wonderful opportunity to record his debut solo CD.

Kevin is also a very accomplished violinist and chamber musician and is the current joint holder of the National Concert Hall of Ireland Young Musician’s Award for Strings.