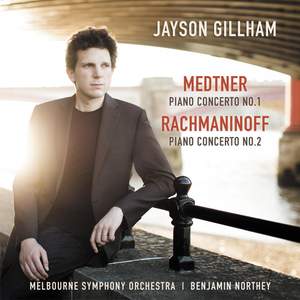 The young Australian pianist is the most persuasive of advocates for Medtner's neglected First Concerto, his bright timbre and judicious use of rubato keeping the lush Romanticism of the first... — Katherine Cooper, Presto Classical, August 2017 More…

The Australian pianist talks to Katherine about the two Russian concertos which feature on his new recording with the Melbourne Symphony Orchestra.

Young Australian pianist Jayson Gillham presents his third album on ABC Classics, featuring the music of two Russian friends and piano virtuosi: Rachmaninoff’s Piano Concerto No.2 – one of the most enduring pieces of classical music – and the rarely performed Piano Concerto No.1 by Nikolai Medtner, written just 15 years later. For these recordings, made in the Iwaki Auditorium of the ABC’s Southbank Centre in April 2017, Gillham is joined in the studio by the Melbourne Symphony Orchestra and their Associate Conductor Benjamin Northey.

Nikolai Medtner (1880–1951) was a close friend of Rachmaninoff (they even dedicated various pieces to one another) but history has treated their music very differently. The great Australian pianist Geoffrey Tozer, who died in 2009, was a rare champion of Medtner’s music, and it was when Gillham was invited to feature in a documentary on Tozer’s life that he discovered Medtner’s work.

Dedicated to his mother, Medtner’s Piano Concerto No.1 was written during the First World War. Also on the album, Angel, the prologue from his Eight Mood Pictures for solo piano: a meditation, as Gillham puts it, on “the rediscovery of a divine song, half-remembered, half-forgotten, of a beauty that cannot be matched on earth”.

Paired with Rachmaninoff’s Piano Concerto No.2 is the contemporaneous Prelude Op.23 No.4.

Born and brought up in rural Queensland, Gillham travelled for hours to piano lessons in Brisbane, before shooting to fame in a number of prestigious international competitions. Major concert appearances in London and the US followed, as did a three-album deal with ABC Classics. His debut record featuring solo works by Bach, Schubert and Chopin, reached number one in the ARIA Charts on release; soon afterwards Vladimir Ashkenazy, conducting the Sydney Symphony, chose to make his first-ever recording of a Beethoven concerto with Gillham at the keyboard.

The young Australian pianist is the most persuasive of advocates for Medtner's neglected First Concerto, his bright timbre and judicious use of rubato keeping the lush Romanticism of the first movement just on the right side of sentimentality and pointing up the almost jazzy syncopations of the finale.