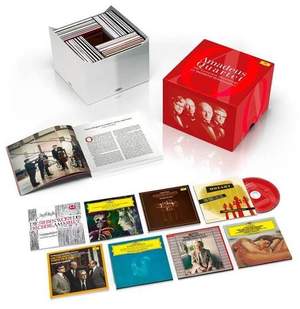 The Amadeus were the most successful and highly-regarded Quartet of the 20th century. Benefitting from the jet aeroplane and from the record industry’s ability to reach out to world, they dominated chamber music making for nearly 40 years.

But concert tours are only successful if reviews are ecstatic and audiences delighted. They both were. For nearly 40 years, the Quartet (who styled themselves ‘The Wolf-Gang’) roved the world, argued, celebrated and worked like no other group, and changed not a single member: Norbert Brainin, Siegmund Nissel, Peter Schidlof and Martin Lovett had a recording career from 1951 to 1987, ending only with the death of Peter Schidlof in 1987.

These 70 CDs – presenting almost their entire discography, together with distinguished and extensive presentation – form one of the most extensive chamber music sets ever created, and stands as eloquent testimony to their thoughtful musicianship, technical calibre and to the immense esteem in which the world held them.

This 70CD set presents the Amadeus Quartet’s Complete Recordings on Deutsche Grammophon on the occasion of the Quartet’s 70th Anniversary.

Several recordings released for the first time ever, others new to CD.

Each album presented in original jackets with facsimiles of original recording session reports.

180-page book presents new notes by Daniel Snowman (author of The Amadeus Quartet: The Men and the Music), plus an introductory note by Martin Lovett, sole surviving member of the Amadeus Quartet; and previously unpublished photographs from the archives of the Quartet’s families.