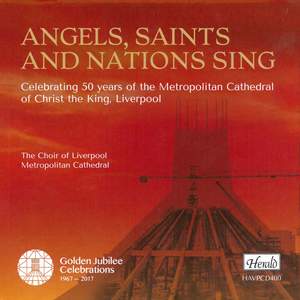 50 years of the Liverpool Metropolitan Cathedral

Milner, Anthony: Love Is His Word

trad.: Abide with Me

trad.: Walking in a Garden

Richard Terry: Praise to the Holiest in the Height

Since its opening in 1967, it has hosted many important events and services, including the joyful visits of HM Queen Elizabeth II (1977) and Pope John Paul II (1982) and a special Requiem Mass organised within hours of the Hillsborough disaster (1989) to mourn those who lost their lives in that tragedy.

Over the last fifty years the cathedral has developed an international reputation for the quality of its liturgical music and choir; the flourishing of this tradition is largely due to the firm foundations laid by Philip and Terence Duffy, respectively Master of the Music and Organist for the first thirty years of the cathedral’s existence.

From the outset, the musicians have preserved and promoted repertory from the Church’s treasury of sacred music, particularly Gregorian chant and polyphony, and continues to endow this treasury with fresh compositions.

This CD is a celebration of the Golden Jubilee of music performed in this wonderful venue.