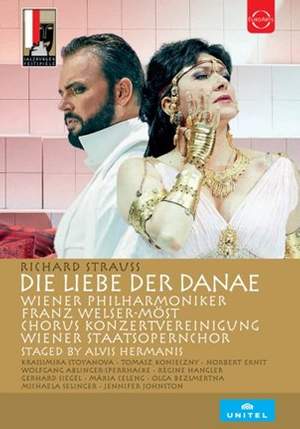 The chief glory is probably the playing of the Vienna Philharmonic - warm, burnished and with all the sparkle of Strauss's score...Welser-Möst's conducting, though hardly revelatory, has an admirable... — Gramophone Magazine, Awards Issue 2017 More…

The Wiener Philharmoniker play under the baton of Franz Welser-Möst, under whom they “conveyed the glittering colors and lyrical intricacies of Strauss’s late score” (NY Times).

Krassimira Stoyanova, who is a regular fixture at the Salzburg Festival, is heading a truly supreme cast and emerges as the “one in a thousand, the true Strauss lyric-dramatic soprano who can soar and swoop, working miracles on phrases that never stop coming” (The Artsdesk).

Alvis Hermanis’ colourful production brings oriental flair to the Salzach, his “staging was spectacular above all else” (Opera Today).

“Die Liebe der Danae” is narrowly linked to the Festival’s rich history. Due to conditions during World War II, the Salzburg Festival, which had commissioned the opera for summer 1944, couldn’t give the public premiere. Instead only a single dress rehearsal, attended by Strauss himself, was performed for an invited audience. Thereafter, the opera was staged in Salzburg only twice and very seldom anywhere else in the world.

The chief glory is probably the playing of the Vienna Philharmonic - warm, burnished and with all the sparkle of Strauss's score...Welser-Möst's conducting, though hardly revelatory, has an admirable seriousness and keeps the action moving along efficiently and effectively. Krassimira Stoyanova rises to the challenge of Danae tirelessly, singing with luxurious, focused tone throughout.