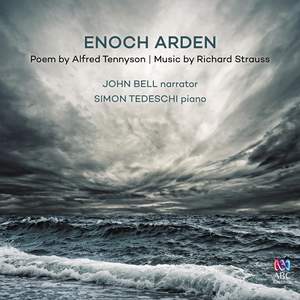 So These Were Wed

Then, Tho’ She Mourn’d His Absence As His Grave

It Chanced One Evening

Prelude – And Where Was Enoch?

He Was Not All Unhappy

Woman, Disturb Me Not

Enoch Arden depicts, in Tedeschi’s own words, "extremities of emotional pathos in which an everyman is thrust into a maelstrom of betrayal, longing, regret and often, madness.” It is the story of three childhood friends, Enoch Arden, Philip Ray and Annie Lee. Enoch and Annie marry and start a family, but after Enoch is shipwrecked on an island for ten years, Annie agrees to marry Philip – believing Enoch to be dead. When Enoch returns, he learns of Annie and Philip’s relationship, and of their child together, and chooses to live in seclusion, heartbroken for his own fate but blissful in their happiness.

The poem Enoch Arden was published in 1864 while Alfred, Lord Tennyson was Queen Victoria’s Poet Laureate; Strauss wrote a piano score to accompany its recitation in 1897. Its most famous recording was a limited-edition release by Glenn Gould with Claude Rains in 1962. This new recording presents a rare insight into the pathos of Enoch Arden’s story, an exploration of humanity just as relevant in 2017 as when it was first written.

This album and subsequent national tour marks Tedeschi and Bell’s first collaboration. “I wanted to do Enoch,” says John Bell, “because I love working with musicians; I love being up close and watching their technique and feeling the visceral presence of the instruments. I’ve admired Simon for a long time; he’s a bit of an entertainer and showman as well as being a great pianist.”

On this album, Enoch Arden is paired with the stunningly evocative Songs of Dawn (Gesänge der Frühe) for solo piano by Robert Schumann. Written in 1853, towards the end of the composer’s tragic life, the five songs are, Tedeschi notes, “devotional one minute, white-hot the next, and then heartbreakingly lyrical, ending with a hymn-like movement that, to me, is as palpable a winding-down of the human spirit as Beethoven’s last Piano Sonata.”