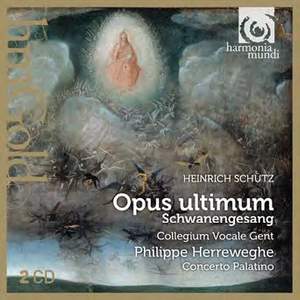 In the early 1660s, Schütz, now relegated among the faded glories of the Dresden court, began to prepare for the idea of his own death – he was now more than 65 years old . . . He embarked on a setting of all 176 verses of Psalm 119, without necessarily expecting the resulting work to be performed: his swansong was conceived for all eternity. Ten years later, this 'Opus ultimum' had assumed the form of 11 motets for double choir. Since the manuscripts were dispersed after his death, it was to be another three centuries before the work was reconstructed – and then sung!

This…enthrals, with superb interpretations and glorious depths of sound from choir and instruments in a wondrously lively recording. Subtle, profound and energised, Philip Herreweghe’s intricately detailed direction, enabled by a brilliant team, is in a league apart.