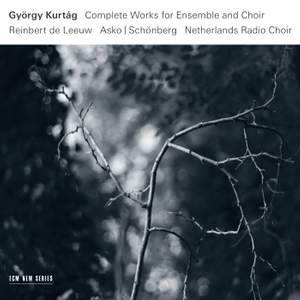 The Day Has Fallen

You Took My Heart

In You I Seek My Salvation ...

Kurtág: Samuel Beckett: What Is The Word, Op. 30b

Night, An Empty Street, A Lamp, A Drug-Store

Where Can I Go To In This January?

Recorded in Amsterdam's Musikgebouw and Haarlem's Philharmonie between March 2013 and July 2016, this 3-CD set is a milestone in the documentation of Hungarian composer György Kurtág's work and also a labour of love. It brings together all of Kurtàg's works for ensemble and for ensemble and choir.

The insightful and precise performances bear witness to extensive preparation by the dedicated Asko/Schoenberg Ensemble. Conductor Reinbert de Leeuw speaks of "learning Kurtág's oeuvre step by step, and performing these pieces repeatedly over a period of twenty years."

De Leeuw consulted extensively with György and Márta Kurtág before and after each session: "There were moments when I was overwhelmed at first hearing", says the famously-demanding Kurtág, "and we could embrace the result immediately. But sometimes we were critical. The fact that Reinbert always listened to our remarks and re-recorded fragments or even whole pieces makes this publication authentic."

The extensive CD booklet includes all song texts with translations, an interview with Reinbert de Leeuw, liner notes by Wolfgang Sandner and Paul Griffiths, and a statement by György Kurtág.

The interpretations are of a consistently elevated standard. Messages of the Late Miss R Troussova, a signature Kurtág score, sets a marker: soprano Natalia Zagorinskaya gives a riveting performance of this expressionist female Winterreise, harnessing Kurtág’s shriek-gesang just sufficiently to stop it tipping into caterwauling.

The more spare Kurtág’s textures, the more this recording excels – and drops the jaw...The playing here is exquisite...The composer’s freedom from the necessity to transition is as musically cleansing as it is communicatively direct, full of tantalising imagery...A proper treasure trove.

Spareness, that supercharged concision, is ever the Kurtag note — and, as caught by these outstanding musicians, resonates powerfully here.

This magnificent, Netherlands-sourced set brings together some of Kurtág’s greatest achievements and is performed with devotional precision and commitment by the ensemble Asko | Schönberg...Kurtág’s exquisitely precise music, wasting nothing, demands that attention.

For De Leeuw, this was clearly a labour of love and, working closely with the composer, he delivers razor-sharp performances that draw the listener inexorably in. Playing is uniformly electric, pianist Tamara Stefanovich and cellist Jean-Guihen Queyras especially shining…an unmissable set