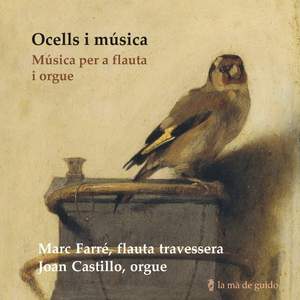 Ocells I Música: Music For Flute And Organ

Nature has always been present in music; we can find numerous examples in composers’ works of all the periods and styles. Probably there isn’t any other instrument as much associated with birds and their symbolism as the transverse flute is, either in composers’ works of present recording, or Beethoven’s Pastoral Symphony, Prokofiev’s Peter and the Wolf, Messiaen’s Le merle noir, etc. Flight, cheerful or nostalgic singing, game, movement and agility are recalled by authors using the flute as an actor that represents shadows moving generally inside nature, which is idealized, poetic, organized, bucolic and plays with stereotypes, but nevertheless it doesn’t make it less attractive and charming. The similarity of the organ and the transverse flute seems evident due to resonant pipes both instruments are based on, in spite of presenting different functioning. The fusion of the sound they produce as a duo surprises and at some moment it can make us believe that we deal with a single instrument.