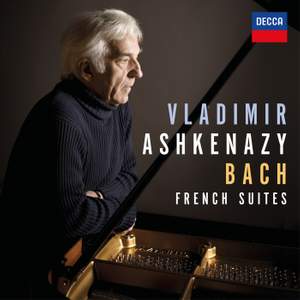 There is much to enjoy here: articulation is scrupulously clean and the contrapuntal textures are never muddied, despite the piano’s natural resonance — BBC Music Magazine, September 2017, More…

Released in celebration of the great Russian pianist’s 80th birthday (06 July) this set of the French Suites continues Ashkenazy’s extraordinary journey through the major keyboard works of JS Bach.

A legendary DECCA artist for more than half a century with over 8.5 million units sold worldwide on CD.

The release comes together with the Complete Concerto Recordings, also released on 30 June. 46 CDs in original jackets - every concerto recording ever made for Decca with Ashkenazy as pianist.

The Guardian wrote of his set of the 48: “merits a place alongside the finest versions of this much-recorded cycle, those by interpreters such as Edwin Fischer, Sviatoslav Richter and Glenn Gould”

“Ashkenazy's approach is closest to that of Edwin Fischer in his directness, articulation and absolute trust in the music's own poetic strengths” The Guardian

There is much to enjoy here: articulation is scrupulously clean and the contrapuntal textures are never muddied, despite the piano’s natural resonance

Ashkenazy aims above all at clarity, and the playing is very fluent, with especially rapid-fire Courantes and noble Sarabandes, the dances always clipped and precise.